* In case of any delay in receiving the OTP, you may verify it later. Please proceed without verification.

Bathinda is an upcoming industrial city which is just 225 km away from Chandigarh, capital of the Punjab State. There are 2 thermal plants and various other industries located in the city. In addition to that, it is the centre of the wholesale food grain and cotton market. Bathinda also have a very rich historical heritage. Due to these reasons, thousands of visitor visit the city every year regarding business and personal visit. These people can reach Bathinda very easily by the road and the rail.

The main railway station of Bathinda is just 2 km away from the central location of the city. The first railway station was established between one town and two villages in 1918. Since then, these town and 2 villages have seen lot of growth. 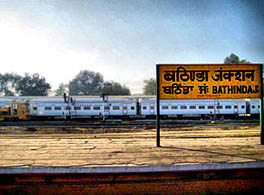 The railway station code of Bathinda is BTI. It is also one of the railway junctions of the Northern Division of the Indian Railways. The Bathinda Railway Junction is reputed to be the largest railway junction in Asia. It has 6 broad gauge routes which extend from Bathinda to the other large cities such as Ferozepur, Shri Ganganagar, New Delhi via Jakhal, Hanumangarh, Rewari via Hisar and Ambala.  Bathinda also has a bypass line which runs through the station. Bathinda is very well connected with the other parts of the country with passenger and express trains.

Bathinda is one of the most popular cities for the business visitors and the tourists as it is an industrial center and also have a rich historical heritage. Today, it is also a center for continuing new developments in the industry. Due to these facts, the city is visited by thousands of the visitors each year from the rest of country as well as the world. The Bathinda railway is also the part of the historical heritage. The railway authority provides lot of facilities which include the IVRS or Interactive voice response system, Waiting Rooms for the first class passengers and other normal passengers, computerized reservation facility, and refreshment rooms.

As it is an important railhead, Bathinda also have a G.R.P. office. The railway authorities have also approved the food stalls, tea stalls which offer veg and non-veg food items. For reading, there are some book stalls, from where you can purchase newspapers in Punjabi and English language, magazines, and story books for kids and novels for the adult people. The Bathinda railway station is a railway junction under the Northern Division of the Indian Railway. So, it is connected to the major cities of India such as New Delhi, Chandigarh, Mumbai, Jodhpur etc. Chandigarh and New Delhi have the train services from Bathinda. In this sector, the other important railhead is Faridkot, which is just 65 km away from the railway junction.