Bhai Rupa is a small town in the Rampura Phul sub-division of Bathinda district of Punjab. The town got its name from a well-known Sikh ‘Bhai Rupa’ (Roop Chand). He was the son of Bhai Sadhu. It was Bhaai Sandhu who laid the foundation of this village way back in 1631 on instance of Guru Hargobind (the sixth of the Sikh Gurus). 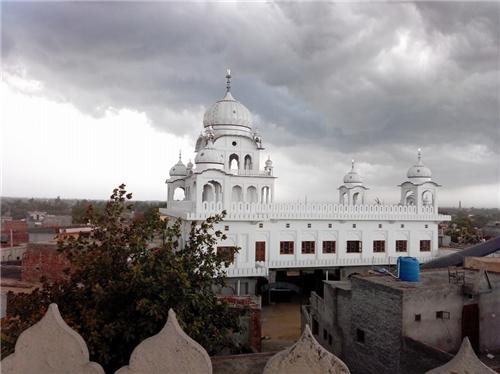 A Gurudwara in the honor of Guru Hargobind was built next to Bhai Rupa’s house. The present Gurudwara of the town Gurudwara Sahib Patshahi Chhevin, a two storey building marks the site in the village. The Gurudwara is affiliated by Gurudwara Local Committee, but still it is managed by the descendants of Bhai Rupa. There is a house near the main Gurudwara that belongs to one of the descendants of Bhai Rupa. It houses an old chariot (rath). It is believed that the chariot was brought from Dera Ram Rai of Dehradun by Bhai Gan Chand, Roop Chand ji’s grandson. Local tradition says that this chariot once belonged to Guru Arjan and was then used by his successors – Guru Hargobind and Guru Har Rai. Bhai Rupa is a religiously important center for Sikhism and people from far and wide come to this small town to seek blessings of the Guru.


The title of ‘Bhai’

The guru was highly impressed by the dedication and devotion of Roop Chand. Thus, he bestowed the title of ‘Bhai’ and ever since he was known as Bhai Rupa. The guru also made Bhai Rupa the head of spiritual welfare of Malwa region. He applied tilak on Bhai Rupa’s forehead as a mark of his blessings. Then gave him karchha (a big spoon) and asked him to serve langar to the needy. This Karchha symbolizes veneration and benevolence for the family.


Explore more about Localities in Bathinda